The HALO project is based on an initiative of the entire German atmospheric science community. It was found that the acquisition of a modern research aircraft is essential to continue the successful research and maintain the leading position of German scientists for the next decades in this area. DLR (Deutsches Zentrum für Luft- und Raumfahrt) and MPG (Max-Planck-Gesellschaft) took the lead and submitted the application for this major research facility investment. This project is supported by scientists from 31 institutes. The HALO proposal was evaluated by the scientific advisory body of the Federal Government (Wissenschaftsrat) who recommended the realisation of HALO without restrictions.

In September 2004 the German ministry of education and research has approved the construction and modification of this high-performance research aircraft. The costs of the HALO aircraft will be covered by contributions from the Ministry of Education and Research, the Helmholtz Association and the Max-Planck Society.

HALO will be based on a GulfstreamG550 – a large business jet. However before the aircraft will take off for the study of scientific questions it will undergo significant modifications that transform the luxury passenger aircraft into a research platform.

The concept behind HALO is to provide an optimal platform for airborne atmospheric science and Earth observation, a well-equipped flying laboratory that allows the scientists onboard to completely focus on their own experiment. A large set of jet aircraft candidates was investigated for its suitability. Finally the business jet aircraft G550 of Gulfstream was found to meet best the essential requirements of the future HALO users:

The main strengths of the proposed HALO aircraft are its long range and endurance, high ceiling altitude and large instrument load capacities, which are not available in such combination on any other research aircraft in Europe.

HALO provides the opportunity to carry out measurements in areas that can currently not be probed by other platforms. This includes nearly the full altitude range of the troposphere and lowermost stratosphere and remote parts of the Earth. It can carry comprehensive payloads for simultaneous observation of a large set of species.

In order to be a suitable platform for environmental research, HALO has to provide certain mechanical and electronic interfaces that need to be added to the basic aircraft. These modifications of the aircraft frame, electronics, avionics, and sensor systems are prerequisite to operate any scientific instrumentation on HALO. In order to simplify the transfer of existing scientific equipment, it is planned to copy many standard interfaces from the most popular research aircraft in Europe, such as the DLR Falcon. Examples for this are openings and certain hardpoints on the aircraft fuselage, experimental power distribution concepts and many standard sensors that will be permanently installed on the aircraft. However, over the past years many additional requests for modifications came up, which would allow the scientists to use sensors or combination of sensors that could not be operated on the existing aircraft before. The final decision on the modifications of HALO will be subject to a meeting of the future users to bring their needs down to a common denominator, which is constrained by financial aspects as well as the possibilities of the aircraft manufacturer. HALO will carry a basic sensor package and data acquisition system in order to provide a complete set of meteorological and aircraft data to each user. The envisaged sensor package on HALO will be more complete than the ones on the present research aircraft and it will use new sensor concepts and better sensor equipment.

HALO will represent a major improvement in the airborne research capability for research institutes and universities to study atmospheric phenomena and their interactions from local to global scales. Aircraft measurements are particularly valuable to describe processes at the scales of transport and photochemistry. The observed spatial variability in clouds, aerosols, water vapour and ozone, for example, ranges from less than 100 m (turbulence) to more than 1000 km (synoptic weather systems). Since oxidation processes in the atmosphere proceed through radical reaction chains, chemical measurements must typically be performed at a time resolution of seconds to minutes. HALO would especially enable studies of the chemistry and dynamics of the upper troposphere and lower stratosphere (UTLS) between about 8 and 15 km altitude. The certified ceiling of about 15 km would enable wide-ranging coverage of the UTLS region from the subtropics to the poles. 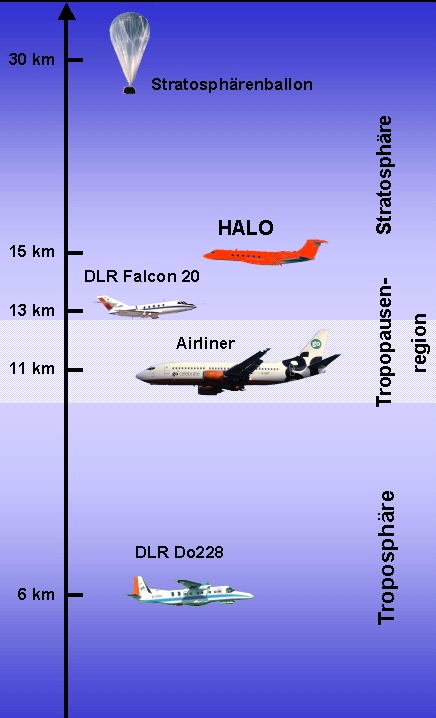 Because of its relatively large size, HALO would facilitate the deployment of comprehensive sets of instrumentation, as developed within Germany or elsewhere, to simultaneously measure physical and chemical parameters to characterise transport, radiation and chemical processes. Furthermore, the long range and high altitude performance would greatly increase the fraction of the global atmosphere in which fundamental physical and chemical processes could be directly observed. Improved process understanding from aircraft measurements contributes to the development of meteorological and climate-chemical models. These models serve to study complex interactions and feedbacks, and to perform sensitivity studies and scenario-based predictions. Confidence in models can only be established by showing that processes are well reproduced at all relevant scales. Satellite images, on the other hand, provide generally only a two-dimensional picture of the atmosphere, and at fairly coarse resolution. Aircraft measurements provide the required three-dimensional resolution, and they can be linked with satellite images to construct a more complete view at regional to global scales. Intensive field measurement campaigns with the HALO aircraft would be guided by model forecasts and (nearly) real-time satellite images to plan flight tracks and to independently test models and remote sensing retrieval algorithms. From the planned measurement campaigns with HALO scientific achievements are expected in nine major research fields:

Although the first scientific missions will not be performed before 2009 a specific planning of the sequence of flight missions for the various scientific questions has already started. This lead time is necessary to initiate the development of new instruments and to adapt existing instruments for the use on HALO. HALO will be open to German as well as international users.